The game is played by two players (one of which may be a computer opponent) on an 8x8 board with pieces that have a black side and a white side. Each player is designated a color and the pieces on the board showing a player's color facing up are theirs. The objective is to have more pieces on the board when the game ends.

The starting position is as follows, with each player having two pieces on the board.

Each player has a turn to place a piece of their color on the board. Any of the opponent's pieces that lie (horizontally, vertically or diagonally) between the placed piece and another of the player's pieces are flipped (thereby becoming the player's). Black always plays first, so the valid moves from the starting position are as follows. 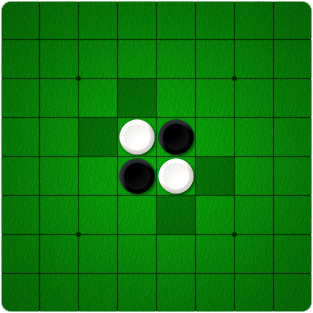 From the starting board position, if black plays the piece indicated with the blue marker in the following image, a single white piece is flipped, as shown.

When placing a piece on the board, flips may occur in multiple directions. For example, for a board in the following state: 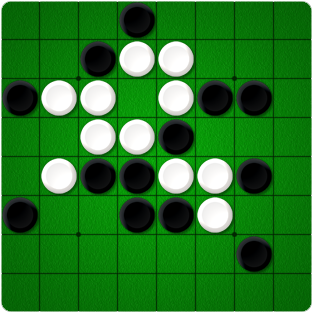 If black plays the piece indicated with the blue marker, seven white pieces are flipped, as shown: 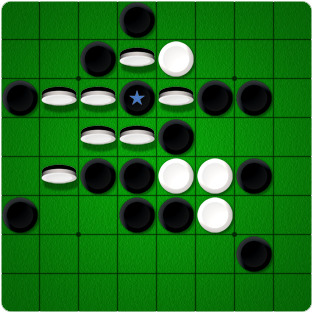 Every move must result in at least one piece being flipped. If a player has no moves, the opponent plays again. The game ends when the board is full or when neither player can make a valid move. The winner is the player with the most pieces on the board. A game can be drawn if each player has an equal number of pieces on the board.

In the early part of a game (when less than half the squares on the board are occupied), try to play moves that result in the pieces in the middle region of the board being your color, surrounded by pieces of the opponent's color.

In the early part of the game, avoid flipping too many pieces. Try keep at least as many opponent pieces on the board as yours.

These first two tips will help ensure that you have plenty of moves (high mobility - see the strategy section below) in the early part of the game, which should put you in good shape for the rest of the game.

Corners are powerful squares, so don't give them away cheaply. Avoid playing in the squares adjacent to open corners until you have to or the corner square is occupied.

Although the aim of the game is to end up with more pieces on the board than the opponent, it is generally not an advantage to gain a majority too early in the game as this limits mobility.

Mobility is a measure of the number of possible moves that a player has. When a player's mobility becomes low, they may be forced into making undesirable moves. It is therefore advantageous to play moves that improve mobility and/or decrease the opponent's mobility.

Corners are key squares as once a piece is placed in a corner it cannot be flipped. Capturing the majority of the corners on the board usually results in a win. Playing the square diagonally adjacent to an empty corner is often a weak move that gives the corner to the opponent.

Stable pieces are pieces that cannot be flanked by an opponent's piece. Corners are always stable, as well as neighboring pieces of the same color. Establishing several stable pieces during the game guarantees an end score for the player of at least the number of stable pieces.

Edges are also important squares as they can only be flanked on one of the three axes. Playing pieces on edges can however have mixed results. Playing edges too early in a game should generally be avoided. Playing an edge square adjacent to an open corner is often a weak move that opens you up to a tactical trap that results in the opponent winning the corner. These squares should thus be played with care.