The game is played by two players (one of which may be a computer opponent) on a board consisting of interconnected points. There are four variations of the game offered here, which are all similar, but played on different boards, with a different number of pieces per player.

Each game starts with an empty board and the players take turns in placing a piece on an open position on the board.

Whenever a player forms a row of three connected pieces along one of the lines on the board (a mill), they may permanently remove one of the opponent's pieces from the board. Opponent pieces that are in mills too may only be removed if there are no other opponent pieces to remove.

In nine and twelve men games, when a player is reduced to three pieces they are allowed to move their pieces to any open position on the board, not just to adjacent positions. This is called flying.

To win the game a player must either:

A game is drawn if:

In addition, a twelve men game is drawn if:

In the placing phase of the game don't keep forcing your opponent to keep blocking mills as this will just result in your pieces all being blocked (low mobility - see the strategy section below). Rather try spreading your pieces around to give you more options once the moving phase starts.

There are two ways to win a game - either reduce the opponent to two pieces, or block off all their moves. These objectives can be somewhat orthogonal as blocking off all the opponent's can become more difficult if you remove many pieces from the board. It is however always important to keep your mobility high.

Mobility is a measure of the number of possible moves a player has. When a player's mobility is low, they are often forced into moves due to the lack of options. The player with higher mobility generally controls the game. Mobility for the game is generally determined in the placing phase - placing pieces in a cluster together means that these pieces block each other and lower a player's mobility. A piece that is completely surrounded by opponent pieces is useless.

Board positions that have more adjacent positions are generally more useful than positions with fewer adjacent positions, as these naturally provide higher mobility. This means that the player that plays first has a slight advantage as they have the first opportunity to claim the better positions (such as the middle spot in the four men game).

Simply attempting to form mills in the placing phase is easily be blocked by the opponent. Playing in positions that could form part of more than one mill cannot be blocked as easily, as blocking one mill may not prevent the other. For example, in the board position below, the player playing black has just placed the indicated piece, which could form part of a horizontal mill or a vertical mill.

In the moving phase of the game, a player achieving a position where they have a mill with a piece that they can move out and then back in again on the next move without the opponent being able to block it, is in a strong position as they remove an opponent's piece every second move.

A player achieving a position where a piece can be moved out of a mill to immediately form another mill (and then be in a position to play the reverse of this move on their next turn) is in a very strong position as they remove an opponent's piece every move. For example, in the board position below, the player playing white can move the selected white piece as shown to immediately form another mill, then move it back on the next move to reform the first mill, and so on. 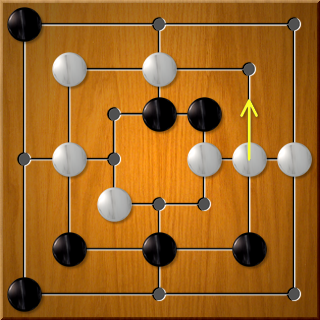 When the opponent is reduced to three pieces in a game that allows flying moves (nine and twelve men games), it can be difficult to win as the opponent can easily block most attempts to make a mill. A player needs several possibilities for mills to win. It is therefore beneficial to get the board into a more favorable position before reducing the opponent from four to three pieces.

When a player is in a winning position, the opponent may try play for a draw. The onus is on the winning player to prevent this.